Don’t let the hot flushes ruin your first video-making experience! Live video recording can be a little daunting at first but good preparation for your videos will go a long way to calming the nerves and shooting something that looks and sounds professional.

We go through five tips to record live video below, which should help you.

1. Script It But Don’t Read It

Prepare what you’re going to say; in fact the script you write will be the single most important aspect of your video because, ultimately, it’s your message and how you deliver it that counts.

When you’re delivering in front of the camera don’t read or you will probably sound “wooden”. The skill is in using the script as a guide but making it sound natural – like it’s off the top of your head.

This may not come easy but it’s what actors do all the time; the Braveheart speech from William Wallace on horseback that sends chills up everybody’s spine – it’s highly scripted but appears natural, of course.

Now, you don’t have to be Mel Gibson, but there are little tactics you can use to make things seem more natural. For example, break your script down to bullet points and then practice using those instead of the full script; gradually make fewer bullet points until you have only a few and you can fill in all the gaps naturally.

2. Use A Mirror To Practice

Stand in front of a mirror and practice it; pin the bullet points on the mirror even and be comfortable with what you’re saying and how you look in front of the camera. Don’t worry if you don’t look like a movie star – that’s not important; it’s the message that’s important, not you.

As you do more and more of these, you’ll get more comfortable and won’t need to take this step. 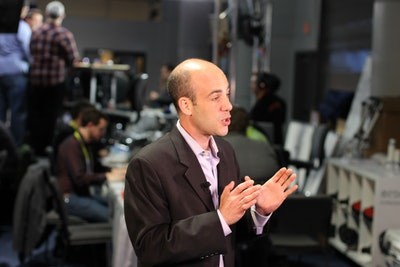 3. Speak To The Camera

Imagine your ideal customer and talk directly to them as a friend; this will make sure your video hits the right pitch and tone most of the time. Avoid making your web video too formal as you can come across as fake or tense. A conversational tone is usually best.

Australians are generally pretty smart at smelling shameless selling when they see it; in the US the “sales” culture is much more brazen and direct but it generally doesn’t work over here or in Europe either.

Make sure you are as real as possible with your videos and don’t lay the sales on too thick!

5. Fix It In The Editing

Remember that editing will fix anything that’s not quite right, as long as you plan well. You don’t need to shoot it in one take; break the filming up into small components so you don’t have to memorise large chunks – a minute at a time or something like that; then you can zoom in at each cut so that it will look to the viewer, once it’s pieced together, as if it’s all shot in one take.

It takes time to achieve the right balance with all the aspects of live video recording but you will get there; successful video requires a lot of attention at first and tips like those in our Competition Crusher workshop will help you. Watch it for FREE by clicking here.